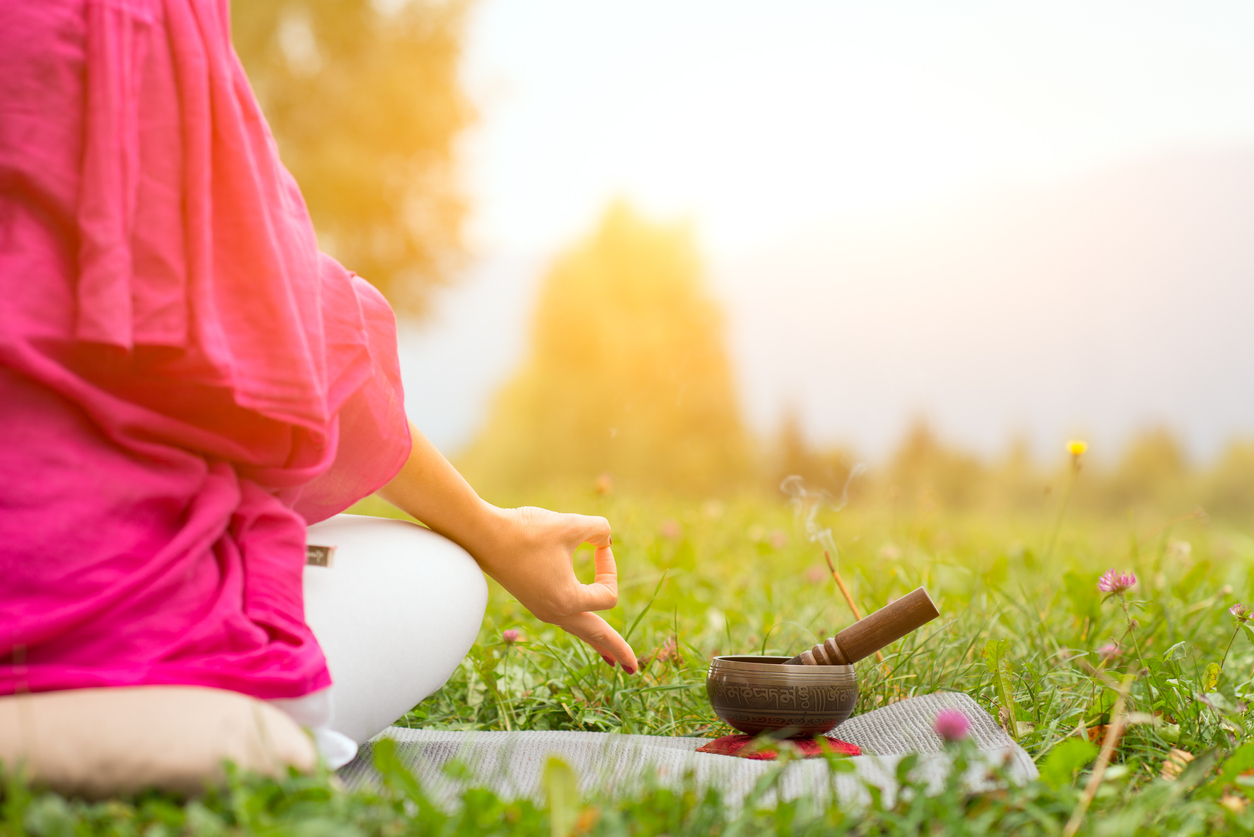 With the COVID-19 pandemic triggering lockdowns, isolating people and reducing social interactions, many have taken refuge in spiritual practices like meditation, yoga, Buddhist chanting and even music therapy to relax.

Perhaps the next worst thing to die for an average human is the thought of losing a loved one. So when the whole family of Rashmi Rekha Das, a journalist based in Odisha, fell victim to COVID-19 last year, she was on the verge of a nervous breakdown.

Barely reconciled with the loss of her father a few years ago, Rashmi was terrified for her three-year-old daughter. “My heart sank to see a perfectly singing baby get to bed in one day. She was under my responsibility and I cursed myself for being an irresponsible mother, ”she said.

It was then that a close friend taught Rashmi to sing four phrases to calm his nerves – “I’m sorry, please forgive me, thank you and love you.” The mantra known as Ho’oponopono, an ancient Hawaiian practice, when said to oneself, is believed to cleanse and heal the mind through feelings of love, forgiveness, repentance, and gratitude.

For Rashmi, it worked like a charm, encouraging her to join an online meditation group. Rashmi says that since then she has not only improved but is also able to handle people and situations with greater clarity.

“The four sentences cleansed my mind of all guilt and worry. I was able to breastfeed my daughter without fear of losing her and she recovered quickly. Meditation, on the other hand, has helped me flush out all the pent-up bitterness, guilt, and dissatisfaction from my personal and professional life. Today, I am a more forgiving person and at peace with myself and my environment, ”she says.

Many, like Rashmi, have found a secure foothold in spiritual practices like meditation, yoga, and chanting during the pandemic, which besides wreaking havoc on lives and livelihoods, pushed many into the abyss. bottomless depression.

The summary dismissal of office colleagues and the sudden deaths of five close friends and three relatives came as a brutal shock to Rajesh Patel (name changed), a telecommunications engineer based in Mumbai.

“Income has been severely reduced and I have a family to feed and rent, taxes, IME loans and school fees to pay. The deaths around me, the fear of being fired from my job, the reduced income and the insensitive attitude of the company towards us were too much to bear at one point, ”he says.

As the burden of stress grew, Rajesh found himself insomniac. He sought psychological help when doses of homeopathy failed to remedy his misery. The psychologist recommended meditation over medicine.

“I have meditated and walked twice a day for the past two months. I won’t say that I have fully recovered, but I am starting to feel better, ”he says.

A recent study found that 66.2% of 649 adults who practiced both yoga and meditation during the COVID-19 pandemic had normal mental well-being, compared to 50.6% of individuals who did not. no. The study, published in the Journal of Family Medicine and Primary Care, associated the practice of yoga and meditation, or preferably both, with “a higher level of mental well-being during the COVID-19 pandemic “.

As busy as her day is, Devleena Chakravarty, a government consultant in Chennai, takes an hour to join her peers in a Buddhist singing group. Although she started practicing in 2013 to relax from the doctoral blues, Devleena says singing has helped her deal with emotional stress and keep negative thoughts at bay.

A typical session involves a group of participants – known as the sangha – sitting together and singing Namu Myōhō Renge Kyō (roughly translated as “I devote myself to the universe”), a mantra from the Nichiren school of Buddhism.

“It is a verbal meditation that aims to bring you absolute happiness despite your circumstances. You are supposed to look at a script or look at a blank wall and sing the words. There is no time limit, you can end it whenever you want. Sometimes I even sang for hours at a time, ”she says.

She recounts her horrific experience last year when she found herself stranded in the middle of a vacation when the country was locked down due to the pandemic.

“My parents and I were stranded at my brother’s house in Hyderabad for two months. It was a great time to bond, but also a nerve-racking time when emotions were running high and you had nowhere to go beyond apartment 2BHK. That’s when we started singing together. We have experienced less confrontation and more understanding. The relationship between my mother and my sister-in-law has undergone a radical change, ”she says.

Many others have turned to music therapy to block noise.

“The sound of ‘Om’, a lullaby or even songs from a movie have healing powers,” he says.

Chatterjee uses Waltz Music, which has a rhythm of three beats in each bar, as standard. “The particular model is called Shasti Taal in Indian music. Rhythm has the power to create vibrations in the brain. Music like Shiva Tandava Stotra or Raj Kapoor Jeena Yahan Marna Yahan were set at this rate. Our brain is stimulated when we chant these mantras or sing these songs. And a stimulated mind has no room for toxic thoughts, ”says Chatterjee.

Chatterjee says he personalizes therapy based on each individual’s health status and social background.

“We first study an individual and then try to cure him. If it’s a Hindu, I can ask them to recite the Ganapati Mantra or the Gayatri Mantra, and if it’s a Muslim patient, it would be one of the Quls of the Quran for them, ”he said .

Chatterjee, who does not believe in treating depression with drugs, believes the disorder developed during the pandemic, mainly due to fear. He says people with severe depression who come to his therapy sessions have reported feeling numb after dusk. “There is a saying from Saint Kabir that words hurt the most. So it’s not the fear of COVID, but what is being said about it that scares people. I ask my patients to avoid watching or reading news or rumors related to the pandemic, or talking about it, ”he says.

Dr Sumathi Chandrasekaran, psychologist and founder of Mind Café in Chennai, agrees that no medicine can keep the body and mind as integrated as these spiritual practices can.

Citing a study which after interviewing 10,000 Indians found that 43% suffered from depression after the COVID-19 outbreak last year, Dr Sumathi says it’s time people understood that the mind and the bodies are connected and a fragile mind makes the body vulnerable to disease.

She attributes the spread of the pandemic primarily to panic. “If COVID is a trigger, how you respond to it matters. The pandemic has spread like wildfire because most Indians have gone into panic mode. When the mind is threatened, the reptilian brain, which controls heart rate and body temperature, activates and secretes unhealthy hormones like cortisol and adrenaline. This causes anxiety, capsizes the stomach, the heart beats quickly and wheezing sets in. This is where it becomes easier for the virus to infect the body, ”she says.

Dr Sumathi says the trick is to put the brain in an area of ​​awareness rather than danger. “When you do yoga, chant the Gayatri Mantra, or listen to therapeutic tunes like Indian classical music, they bring you to a state of consciousness, preventing the mind from wandering. It helps you become aware of the pandemic and protect yourself instead of panicking and falling prey to it, ”she adds.

The joy of sharing

Since most of these practices are group activities, members say that one of the most therapeutic parts is sharing their thoughts with fellow groupmates and listening to their stories.

“The beauty of my Buddhist group is its white collarless nature. When I was in the United States before the pandemic broke, we had former drug dealers and homeless mothers singing with us. Realizing that my miseries are tiny compared to theirs has given me a new perspective on life, ”says Devleena.

Rashmi, who credits meditation and yoga with putting her life back on a disciplined path, says the changes in her own life inspired her family, especially her mother, to embrace the practice. “She became depressed and sleepless after my father died and couldn’t sleep without taking pills. But now she is off medication and is looking forward to life, ”says Rashmi.

Swami Suyagna, a full-time monk and volunteer at the Coimbatore-based Isha Foundation, said people were increasingly aware of their mental and physical health after the pandemic. Sharing the account of a Sathyamangalam volunteer in Erode, Suyagna says that a school field in the village of the former, which was once empty, now has at least 20 walkers who go around in the morning.

Read also : Dear Diary, you are probably the most underrated story source in the world

The monk says that the last few months have also seen an increase in the number of clicks to Isha’s free meditation videos like “Isha Kriya” and “Simha Kriya” on YouTube.

“Everyone has lost someone to the pandemic and people, warned by this, are starting to turn in on themselves. The main changes that I have noticed in people are the change in outlook on life and the practice of consciously eating and exercising, ”he adds.