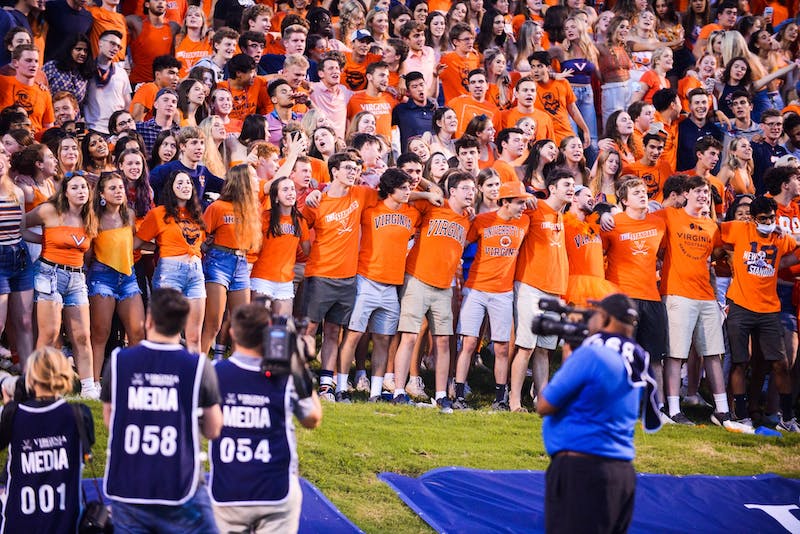 Just under three minutes into Virginia’s football season against William & Mary, sophomore kicker Justin Duenkel had the opportunity to score the first three-pointer of his college career and put the Cavaliers on table. After a solid snap, Duenkel sent the pigskin straight between the posts – giving Virginia a 3-0 advantage over the tribe. A sea of ​​orange clad Cavalier fans erupted, pulling their hands up in the air with glee. Excited, elated and electrified, their arms quickly fell onto each other’s shoulders as the Cavalier Marching Band began to play a familiar tune – “The Good Old Song”.

Written 128 years ago, “The good old song” is Virginia’s unofficial fight song. Fight songs are an older tradition in college sports in the United States, and they are used to allow fans to unite and encourage their team in unison.

“The Good Old Song,” although less well known than Oklahoma’s “Boomer Sooner” or Notre Dame’s “Victory March”, is popular with Cavalier fans. It is sung to the tune of “Auld Lang Syne”, a popular song typically sung on farewell occasions such as graduation ceremonies, funerals and New Years Eve, and is performed by fans of Virginia after every score in a home football game, as well as other sporting and college events. Note that it’s performed, not just sung – Virginia fans can be found with arms around each other, swaying in unison as they echo the following lyrics.

“That good old song of

We will sing it over and over again

He gladdens our hearts and

To hear them scream and roar.

We come from old Virginia,

Where everything is bright and cheerful.

Let’s all unite by the hand and cry out

For the dear old UVA.

When this part of the song is finished, a song follows. Each drops their arms from their neighbor’s shoulders, and their right hand rises in the air for a quick recitation of the last words:

The late Edward H. Craighill Jr. is credited as the songwriter for the first part of “The Good Old Song,” but he once wrote that “no one should be credited with authorship” – admitting that several students in more of himself were involved in the process.

As for the song “Wah-hoo-wa”, it was actually used by Cavalier fans before the writing of “The Good Old Song”, but its exact roots are uncertain. Some say it was borrowed from Dartmouth College, while others attribute the vocals to singer Natalie Floyd Otey. In 1893, Otey performed “Wher’er You Are, There Shall My Love Be” before a largely student audience in a Charlottesville concert hall. According to legend, she mumbled the words “Where’er You Are”, and when the students started to join her, those words turned into “Wah-hoo-wa”. After that, the word is believed to be known among the student body and was eventually incorporated into the performance of “The Good Old Song”.

Students have also made unfavorable additions to the lyrics to “The Good Old Song” over the years. Following the phrase “where everything is bright and gay” fans have been known to shout homophobic and non-sporting epithets – going straight against the intent of the song. It started in the 1970s when fans were shouting “Not gay! And, after the intervention of students decades later, transformed into “Fk Tech”, a profane dig against Virginia’s enemy, Virginia Tech.

In 2019, the University made a valiant effort to curb this practice – to “Keep ‘The Good Old Song’ good. “ This video has been shown in football matches throughout the season and has racked up nearly 100,000 views to date, but fans at Scott Stadium still don’t hesitate to chant “F — k Tech” whenever they see it. ‘they have the opportunity.

Alumni, students, faculty and other fans will all gather at Scott Stadium this weekend as the Virginia soccer team faces their next test – the Homecoming game against Duke. Kick-off is set for 12:30 pm Saturday, and more likely than not, everyone will have the opportunity to perform “The Good Old Song” at least once throughout the ACC game. Now, by joining this long university tradition this weekend, you will understand its history a little better.