You must see this. Really.

Even if you think you’re allergic to modern opera.

The production of English composer Jonathan Dove Flight which opened Friday night at the Winspear Opera House is one of the finest achievements of the Dallas Opera in recent years. Set in an airport, the 1998 opera mixes aloud humor and sheer silliness, even a certain nastiness, with touching interactions and emotional reflections. (How many of life’s charged experiences – separations and reunions, dreams and disappointments – occur at airports.)

Flight is also a vocal showcase of fast-paced dialogue and ensembles, soaring tunes and virtuoso solo fireworks. Both vocally and dramatically, a powerful cast really delivers.

The orchestra is a driving force, pulsating and shimmering in minimalistic urgency – and devilishly delicate rhythms – but supporting at times with glowing clouds of sound. Don’t be surprised to hear a sly hint of Wagner here, or Benjamin Britten there.

Based on the true story of a refugee who lived for years at Paris Charles de Gaulle airport, the librettist April de Angelis features a mix of people in a departure lounge. In an all-too-familiar experience here, a thunderstorm cancels all flights, leaving everyone to make the most of a night at the airport.

“Flight contains mature themes, sexually suggestive staging, and mild language,” the Dallas Opera website warns. But it’s rather banal compared to what you can see in the movies.

In a forced intimacy, these characters reveal their hopes and their fears, their aspirations and their insecurities. Misplaced flirtations and a surprise date generate awkwardness and anger – and a funny mix of clothes. Director Kristine McIntyre balances crazy action with introspection, really bringing the characters and interactions to life.

Bill and Tina hope to rekindle the marital fires over the holidays. Minskman and his heavily pregnant wife, Minskwoman, have left for her new post as ambassador to Belarus, but, fearing a very different life, she pulls out at the last minute. A steward and an air hostess turn out to be as lecherous as they are officially perky.

But three characters are alone. Stuck at the airport, without papers or money, the Refugee asks others for help, but also distracts them and cheers them on. An older woman waits for a much younger idol who never arrives. Towering above it all, the controller relishes his power – such as it is: announcing flights, reporting weather, and poking fun at superficial travellers.

Abigail Rethwisch is by turns authoritative and ethereal as controller, her magnificent soprano dispatching bel canto blossoming and soaring into the vocal stratospheres. Emphasizing the “otherness” of the Refugee, he is embodied by a countertenor, here John Holiday, who is surprisingly powerful and finely concentrated.

Kristen Choi, with another attractive and brilliant soprano, portrays the air hostess, well-matched to the crisp baritone of Will Liverman’s steward. Deanne Meek’s mezzo is a size smaller than the other vocals, but she makes an endearing case for the older woman. Zachary James’ rough bass suits the immigration officer.

A few of the tricky vocal sets at the start of the first and third acts weren’t quite together on Friday, understandable on opening night and sure to improve in later performances. But the musical director of the Dallas Opera, Emmanuel Villaume, handled the proceedings with impressive aplomb. Previously, he drew loud applause with an on-stage statement against the Russian invasion of Ukraine. The orchestra provided workouts with bright colors but also subtle atmospheres.

In sound and decor, Flight is indeed an opera of our time. But its themes of alienation and frustration, of getting by even as we fantasize about better things over the rainbow (or thunderstorm) are timeless. At the end, there is a literal rebirth, even as the characters begin to realize the resources within themselves. 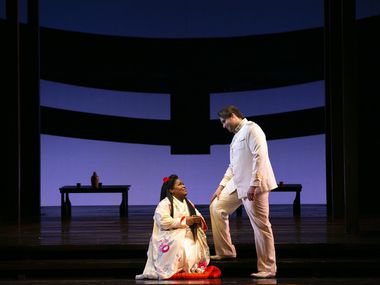 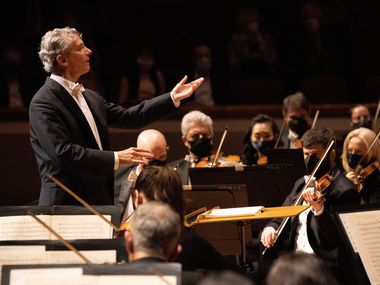