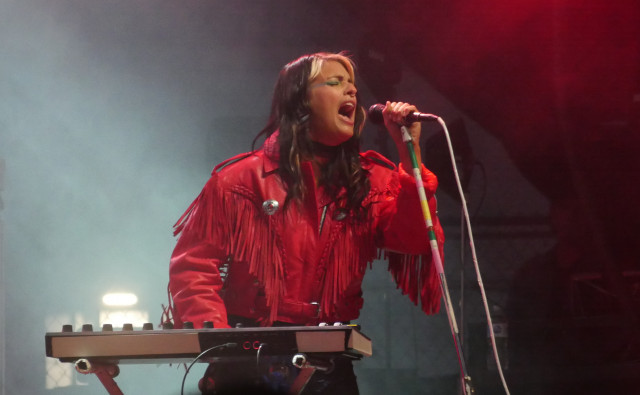 Denim is making a comeback

Live music returned to Kelowna on Saturday night, with Denim on the Diamond making its triumphant return.

The popular one-day music festival at Kings Stadium in downtown Kelowna has been forced to cancel the festivities in 2020 due to the COVID-19 pandemic. And although changing health regulations throughout the summer put the event in jeopardy this year, organizers Mitch Carefoot and Kurt Jory were able to pull it off with just a few weeks’ notice.

One of the last-minute changes to this year’s event was the requirement that all participants be doubly vaccinated, but that didn’t stop thousands of people from filling Kings Stadium on Saturday night.

The music started at 12:30 p.m. with Teigen Gayse of Kelowna, followed by Shawnee Kish of Edmonton and The Royal Foundry.

Kootenay’s electro-bluegrass duo Moontricks brought heavier and more upbeat bass music to the stage, before Yukon Blonde performed their first show in two years. The rock band – originally from Kelowna but now based in Vancouver – appeared moved after their set, hugging each other and thanking the crowd for their energy.

Dear Rouge from Vancouver took the stage after dark for an energetic rock set, with singer Danielle McTaggart putting all she had and more into the performance.

The evening ended with a set by country group The Hunter Brothers. The group of five brothers are from Shaunavon, Saskatchewan, and one of the brothers, JJ, is a former Kelowna Rocket.

Throughout the day, participants played lawn games, stretched out on lawn chairs, and enjoyed drinks and food from local food trucks.

Kelowna Mayor Colin Basran took the stage before the Hunter Brothers began to thank Carefoot and Jory for hosting the event.

“Do we want Denim on the Diamond 2022? Do we want AltiTunes Big White 2022?” Basran told the crowd, to great cheers. “So keep supporting these guys because they get there… I’m so proud of them.”