GARTH Brooks was moved after an incredible gesture by a worker at Dublin Airport.

Paul painted a photo of Garth and his half-sister Betsy, taken during a visit to Ireland in 1994.

The stunning painting was done in black and white on a small canvas and presented to Garth at the airport.

Delivering the touching gift, Paul explained how he used stencils, spray paint and layers to create the artwork.

An emotional Garth hugged Paul and thanked him for the play. 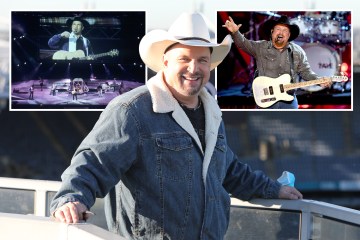 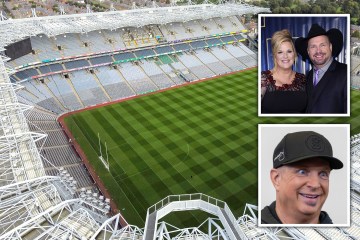 He said: “That’s very sweet. I was thinking of her [Betsy] today.”

The music legend added, “Thank you so much man.”

Dublin Airport officials filmed the exchange and described it as a “lovely moment”.

They said: “A beautiful moment captured at #DublinAirport earlier this week when daa operations officer and artist Paul Doyle presented

“@garthbrooks with a painting he created from a photo of a young Garth and his late half-sister Betsy taken on his very first trip to Dublin in 1994.

“Paul – known to his colleagues as ‘Pabs’ – completed the #GarthBrooks painting using stencils and no less than 11 coats of spray paint.

“A video showing how Pabs created the piece can be found on his Instagram page (@pabs__art).”

The 60-year-old will banish bad memories from his abandoned 2014 shows in Croke Park today when he takes the stage in front of 80,000 fans at the GAA headquarters.

Rehearsing with his band on the main stage at Croke Park on Thursday for the first time, he focused on songs and some of his greatest hits, specially selected for an Irish audience.

Garth said, “One song we haven’t played with a full band in about 15 years is If Tomorrow Never Comes…but that’s what they’ll get.”

He said the first show at Croke Park was going to be the hardest because it’s the unknown.

He said, “The first show is going to be rusty, I’m going to cry a lot, hopefully. We will be like a boxer in the first round, feeling his opponent go out.

“First two or three songs, myself and the crowd will see if the other has changed?

“But by the second song, hopefully I can’t hear myself sing, the crowd will see so loud… we’ll be racing until curfew at ten-thirty to get as many as we box.”