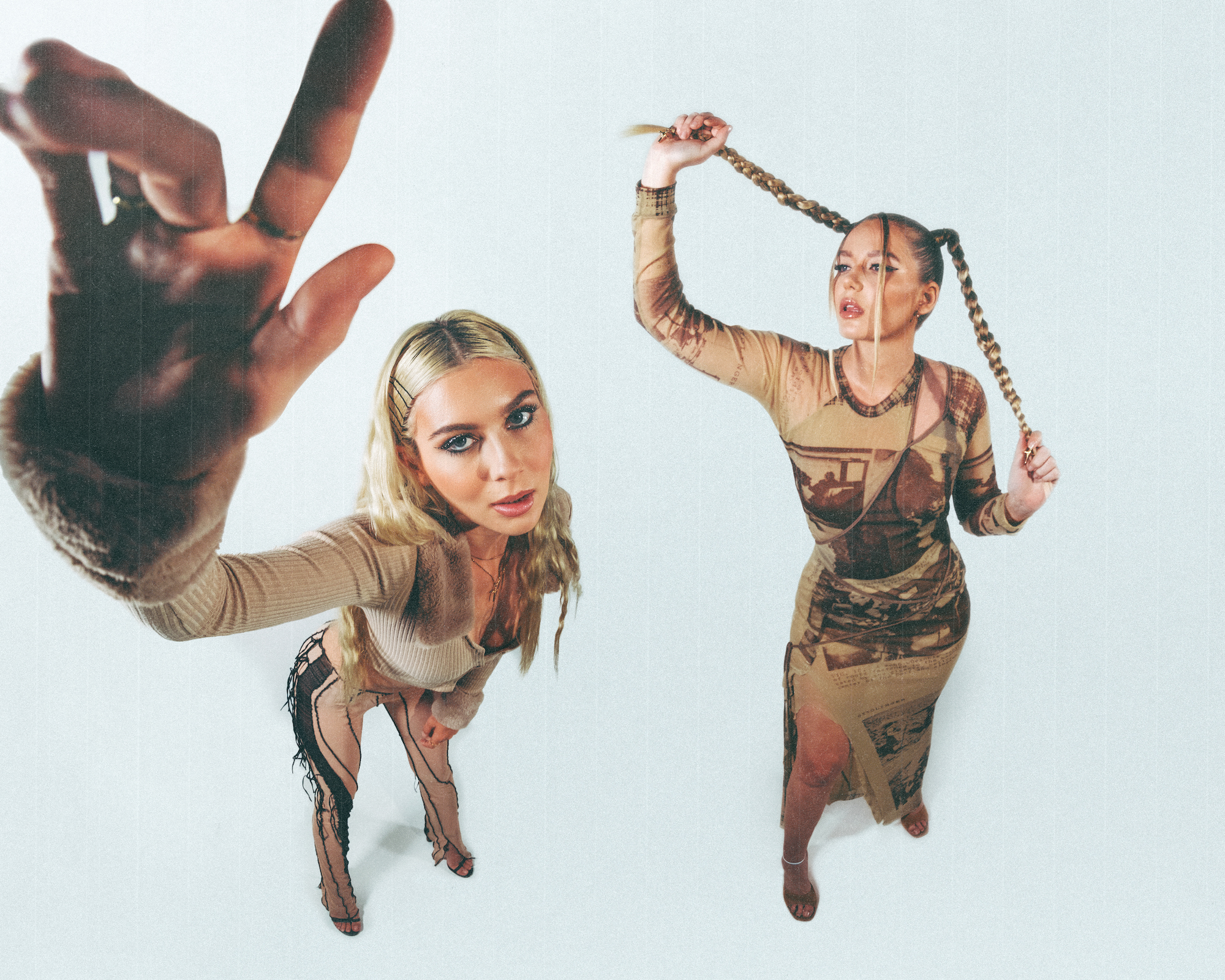 Singer / keyboardist Ruby Carr and singer / bassist Natalia Panzarella met at just 16 and formed a long-standing bond in their friendships and careers. Their EP “Dancing on the Sun” and their singles “Get Together” and “Fucked Up” caught the attention of Selena Gomez and Birdy with whom they toured and collaborated with Zedd, ILLENIUM and Gray. In 2018, their hit song, “Savage”, certified Gold, went viral with over 100 million streams and in 2020 was given a second life with an official remix featuring BIA. The song is currently used in promos for “American Horror Stories”.

The duo partnered with VAST, a platform that helps creators grow their network and net worth, and loaned “Bipolar” to a PSA for Project Healthy Minds – a nonprofit organization facing the mental health crisis. In addition to a live panel discussion moderated by Hayley Hasselhoff – actor, model, self-acceptance coach and host of the new podcast, Redefine You: A Conversation for Wellbeing, the initiative included an NFT auction powered by the AI ​​from the “bipolar” Music video. The visual features a storyline that depicts manic mood swings between his pair of on-screen couples, dramatized with an evocative overlay of effects and graphics generated entirely in AI by Seyhan Lee and AI artist Lulu XXX.

The MakersPlace auction donated 20% of the net proceeds to the Healthy Minds Project. It was one of the first integrated offerings of music and visual NFT designed to improve mental health. Bahari’s songs topped 650 million streams and last year their successful ILLENIUM collaboration, “CRASHING” was featured in the soundtrack to To All The Boys: PS I Still Love You. Partnering with Epic Records, the duo released their latest EP Forget You this summer, and continue to release more of their inherently personal and relatable music throughout the rest of 2021. We had the pleasure of talking with the girls about their roots, rise, inspirations like Dolly Parton and Fleetwood Mac and how they navigate mental health.

Discover the interview below …

Tell us about your new song “Ways Of Love” – what was the inspiration behind it?
Bahari: We wrote “Ways Of Love” about that moment and that feeling right before you finally gave in to falling in love with someone. It’s about that decision to trust someone with your heart and learn the way they love.

You recently released a new EP, “Forget You”, which contains deeply personal songs, in particular “Jackie Kennedy” and “Bipolar”. Can you tell us a bit about what inspired these songs? Tell us about your process and how you were able to create in the aftermath of such a tragedy. Why did you name these songs that way?
Nathalie: With “Jackie Kennedy”, after having lost someone very close to me, I could not speak about it for two years. The song was really therapeutic for me while writing it. After we released the song and performed it live, we heard the loss stories from so many others. Being able to connect with them made me feel less alone and our hope is that the song did that for them too. The ups and downs of relationships that we were both going through at the time while struggling with our own sanity were what inspired ‘Bipolar’. It was something that I wanted to be open to for a long time and we realized that we were both going through similar situations.

Natalia, you are diagnosed with bipolar, when did you find out about it and how do you treat it? You’ve talked about it openly to fans and the media, which is so great in helping people normalize the conversation and take the shame out of those who are also facing the same issue. What made you so eager to share?
Nathalie: I was diagnosed two years ago. As a person who is still learning, being open about it and going into therapy are two things that have really helped me. We wanted to share this with our fans because we realized that so many people were going through it as well. It was scary at first, but after opening up to our music, we hope it helps normalize the conversation.

You are both very active in the organization “Project Healthy Minds” which offers mental health help to those in need, how did you find them and tell us what exactly they are doing? ?
Bahari: We are really excited to be working with Project Healthy Minds and having a platform to share some of our stories in the hope that they would comfort or help others. Project Healthy Minds offers many resources like therapy, numbers you can call to speak to someone immediately, and a community of people ready to share their stories and end the stigma of mental health. You can find more information at https://www.projecthealthyminds.com/.

Mental health has thankfully become as popular as the COVID-19 conversation, due to the pandemic it looks like people are finally starting to really sympathize with mental struggles and healing, how has this tour changed the points of view on things? What has been positive for both of you with this global crisis?
Bahari: Isolation and having to deal with something so scary has certainly had a huge impact on the mental health of people around the world. However, it definitely opened up the conversation about mental health and contributed to the de-stigma behind talking about it. At least for us it was really hard to adjust, but something positive that we got from the whole experience was being able to take a break and having to slow down. It gave us a lot more time to write and learn about ourselves.

What does the whole music creation process look like? How do you know when a song is over?
Bahari: We’ve been writing music together since we were 16, so it almost became second nature. What makes it so special is that we are able to write about each other’s experiences, as well as our own. As perfectionists it’s hard to know when a song is over, but we usually know it’s done if Natalia starts to cry when we pick up the final mix.

Which famous and / or unknown artists inspired you when you were younger and also today?
Ruby: My mom’s best friend, Janelle, was my biggest inspiration. She always sang and wrote her own music. I knew each of her songs by heart and remember thinking I wanted to be like her.
Nathalie: My mom sings country music, and growing up watching her play and write songs really inspired me. She also showed me so many artists who had a huge influence on me, like Dolly Parton and Fleetwood Mac.

You’ve toured with major artists like Selena Gomez and collaborated with many others, what have been the best take out? What surprised you? How have you changed from these experiences?
Bahari: Selena Gomez’s opening on the revival tour was one of the first tours we’ve ever done. We learned so much from it, but what really stood out for us was seeing how much hard work and dedication it takes to put on a show like this. It inspired us so creatively to put on the best show possible. She was so supportive of us as new artists and that is something we will never forget.

Who would you like to collaborate with the most?
Bahari: There are so many dream collaborations for us, it’s hard to pick just one. Right now if we aimed really high, it looks like Kendrick Lamar or The Weeknd.

What role do you think fashion plays in your life? How would you describe your style? And which designers do you like the most or are you more of the vintage boutique type?
Bahari: Fashion plays a huge role in our lives. Since we were young, fashion has always been a source of inspiration for us. Chanel, YSL, Jacquemus, the list goes on. Of course, vintage stores and thrift stores are probably where we buy most of our clothes. It’s hard to describe our style, but what we love most about fashion is being able to express ourselves through our style as well as our music.

You met at only 16 years old, tell us how it went and when did you know you would form your duo?
Bahari: We met for the first time and became friends. We were both sort of outcasts and our shared love for music is what brought us together. After doing “Wild Ones”, the first song we wrote together, that’s when we knew we wanted to do this together.

Where does the name Bahari come from? How did you know it was the right name?
Ruby: Bahari means “the ocean” in Swahili. I grew up in Kenya and Natalia would ask me to teach her a few words. She asked what the ocean meant. I said Bahari, and we both kind of looked at each other and decided that was what we should call each other.

How is a normal day going for both of you?
Bahari: Lately we’ve been working on our next EP. So generally our day is like a lot of coffee in the morning and working from our home studio all day.

Fans might be surprised to know what’s going on with you two?
Ruby: Natalia wakes up at 6am everyday, and she loves making furniture, lol. I spend too much time playing video games!

What are your favorite places in LA and when traveling is safe, where do you hope to visit?
Bahari: The Botanical Gardens of the Huntington Library, and of course Malibu. There are so many places we would love to visit, but I would say we really hope to do an international tour.

Finally, what does your own version of Wonderland look like? Describe it to us as your most ideal day, life, or vision?
Bahari: We miss the tours and the experience of new places and cities. Our day in Wonderland would be: waking up somewhere we’ve never been, eating delicious food, exploring a new city, then playing a show. Our favorite feeling is playing new songs for the first time.