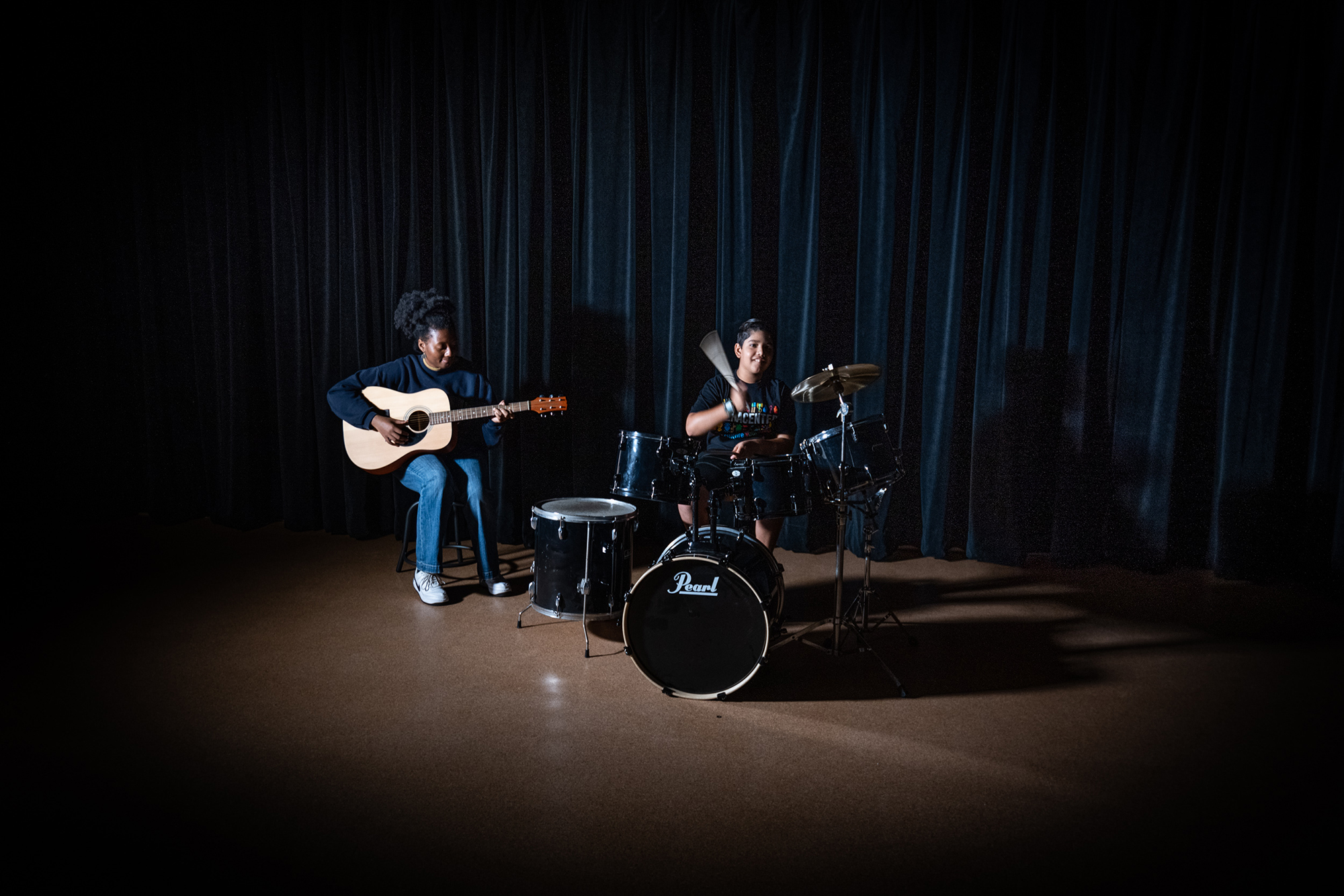 In the earthquake-prone Bay Area, an epicenter is usually not the place to be when things start to shake, but the opposite is true for EPACENTER, a new arts center for young people in East Palo Alto. The name may share its pronunciation with “epicenter,” but the new facility provides a solid foundation in arts and leadership for local youth – designed by the community, for the community.

The center brings together the visual and performing arts, technology and creative spaces, and resources for young people in a 25,000 square foot building with state-of-the-art facilities at 1950, bay path. Construction of the center, which began in 2018, is complete, but with the pandemic still of concern, the official opening will take place in 2022, although the center already offers virtual classes.

A culmination of local youth’s vision to create an arts center in East Palo Alto, EPACENTER offers free classes in a wide variety of artistic disciplines for young people aged 3 to 25.

The arts center represents more than a decade of work by the Youth Action Team and other dedicated youth activist groups in eastern Palo Alto, such as Live in Peace and Youth United for Community Action, a declared the general manager of EPACENTER, Nadine Rambeau.

These groups’ efforts to support arts programs in East Palo Alto began around 2010, with youth and adult allies organizing arts programs and projects in the city and polling the community to find out how an arts center would best serve residents. .

And from the name of the center to the choice of renowned architect Kulapat Yantrasast to design the building, to the planning of the establishment’s various course offerings, the process of making EPACENTER a reality was driven by local youth and their families.

“Not everyone has the opportunity to see what they envision come to life. That’s what this building is, it’s a symbol of the fact that the young people in this community had a vision of what they needed and it is now coming to life and that will benefit other children in the future, ”said Rambeau.

The center was created as a one-stop-shop to bring high-quality arts education to East Palo Alto, a community often excluded from the top-earning Silicon Valley, but heavily impacted by its powerful economic forces, Rambeau said.

“We are committed to ensuring that everyone in Silicon Valley – in this wonderful place where there is a lot of innovation and talent – that everyone has access to become that person who creates the next thing whose whole world will benefit. So in a place like EPACENTER, that’s what we want to happen, where the students can be that person. “

The purchase of the land where EPACENTER is located, as well as the design and construction of the building were funded by the John & Marcia Goldman Foundation, which focuses on grants in the fields of youth, health and the arts. John Goldman said young people in the community led the project and it represents their vision.

“We weren’t the ones telling them what we wanted, they were telling us what they needed. And we were there to make it happen,” Goldman said.

A council of young advisers shaped both the design of EPACENTRE and its programming, ensuring that the facilities and programming truly reflect the needs of the community for which they were created.

Keitlan Wallace, 20, who has been active with the center for about four years, said that in the planning process some priorities for her and Elizabeth, 14, were to make sure there was a large bathroom. dance practice.

“It was an important thing because we were practicing in a very small room. We really needed a big space – a private space – for us dancers to be able to do choreography and performances.

The theater was important to all of us, ”she added.

Elizabeth and Keitlan Wallace also agreed on the importance of having a place to eat at the center, where students can both refuel and congregate.

When reviewing the lineup, the Wallaces said a challenge is thinking about how to accommodate a wide range of ages and interests, but when it comes to finalizing lessons , there were more course offerings than originally planned.

“We were shocked to see that they had given the community a lot more options. They added some programs, like college admissions for high school students who are planning to go to college,” Keitlan Wallace said.

Staci Edwards, 18, a music student who plays guitar and double bass, is currently a member of the centre’s Youth Advisory Council and has been actively involved in the planning of the center for about four years. She described her hopes for EPACENTER as a safe place for the youth of East Palo Alto to come together, connect with mentors, and develop both their artistic talents and leadership skills.

Edwards said she was aware of the need “for a way for young people to express themselves in safety, to have a space where they can be vulnerable and creative.”

But in addition to arts education, she focused on broader skills to help overcome the challenges posed by the Bay Area economy and the ever increasing expenses of living here.

The center also aims to “help young people become better leaders and enable young people to seize different opportunities and be able to stay here in Silicon Valley, without having to leave – therefore, find a job here, know how to live here and don’t be forced to go, ”Edwards said.

Students aged 14 and over can not only take art classes at EPACENTER, but also learn how to turn their creative skills into livelihoods, with internships and apprenticeships that provide real-world experience, as well as learn essential behind-the-scenes skills, such as marketing and business planning.

Since 2010, as the group of students involved in the project slowly changed, with some “aging” and other students getting involved, the vision for the center itself has continued to evolve, Rambeau said. The center plans to expand the programming beyond a strictly artistic orientation, at the request of youth counselors and the community.

“They were thinking about how they would like to see us react now, in the face of COVID and in the face of the murder of George Floyd and other individuals,” she said,

To this end, the center is currently running art therapy classes and plans to offer music and theater therapy, to help find some healing amidst many stressors and crises like the COVID-pandemic. 19.

EPACENTER recently received a $ 500,000 “adaptation grant” from the William and Flora Hewlett Foundation to help meet the challenges posed by the pandemic. The funds will also help plan and implement longer-term programs.

“This organization becomes fluid and responsive to a cohort of students that will constantly change,” said Rambeau.

The pandemic has meant the center has pivoted both in what programming is available, but also how it is delivered, with classes still online for now. EPACENTER is offering a variety of online classes this fall, including art, dance, design, film and music classes, with plans to start hosting in-person classes in January.

Although the classes are not yet in person, the process of planning and carrying out EPACENTRE has already made it an important presence in the community – likely to have an impact for years to come, thanks to the vision of the young people. local leaders.

“I would like EPACENTER to be like a home where the community can be creative, watch EPACENTER and be motivated to create new things, have the opportunity and the resources to express themselves,” said Edwards.

“People have different passions and I think this program will give them the opportunity to achieve those goals. This is what I want for the future, I want it to be known for helping people achieve their passions. and their goals, ”said Keitlan Wallace.