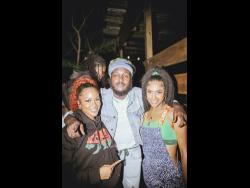 Gratitude is something roots reggae artist Samory I knows well, having been raised in the Seventh-day Adventist Church, where giving thanks and being grateful to the Creator for blessings is a way of life. It is therefore not surprising that he is one of the artists of the Gratitude Riddim.

Gratitude is the latest juggle from Grammy-nominated musician and producer Phillip “Winta” James. Samory’s contribution is titled love and mercytwo of the main ingredients that affect the thing called gratitude.

the Gratitude Riddim, which is marketed as a “contemporary one drop reggae riddim with traditional drums and bass from the legendary duo, Chris Meredith and Wilburn ‘Squidly’ Cole”, features Samory I, Mortimer, Kumar, Naomi Cowan and Ras-I. It had its official launch last week and the Rasta Nuh Gangsta The singer is still on top since his recent performance at Dubwise Jamaica. It was his second “live and in person” show since the pandemic hit in 2020 and Samory I is full of gratitude.

“The launch was amazing,” he enthused, as if reliving the moment. “The feeling of working in front of a live audience again was incomparable. It’s always a great feeling to be well received by people and to know that the message we’ve worked so hard to put to music is embraced.

He added: “It was my second time performing live. I did a 4/20 [April 20] show at Chinna Smith’s Inna the Yard but which had ended abruptly due to police intervention.

Samory I is one of the reggae artists who made the European continent his musical playground before the pandemic and performed there at most major festivals. Currently, he is preparing to pack his bags and hit the road.

“We already have a show confirmed. Reggae Geel Festival in Belgium. I’m grateful for that and really looking forward to it,” he shared.

Reggae Geel is one of the oldest reggae festivals in Europe, having been founded in 1978, and is the largest in Belgium. It takes place in August.

Among the songs that Samory I is known for are Take me Oh Jah, Black gold, Feeling, Call on Jah, To survive and just believe.