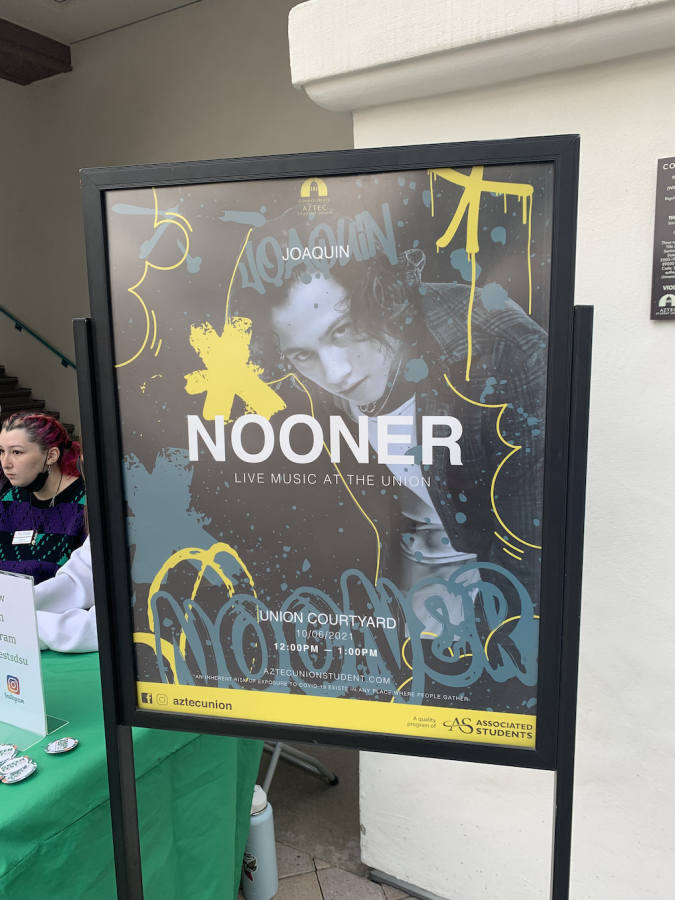 The Union of Aztec Students hosted the event on October 8.

According to the official website, Nooner is an opportunity for people on campus to hear from a local artist for an hour, within the Union of Aztec Students.

Paez is a junior at San Diego State, majoring in psychology. He had gone to the midday performances in his freshman year and said he was still jealous of performers but didn’t know how to act.

“I was at a party the other day and I met Lindsay,” Paez said.

Lindsay Scholbrock, the chair of music and entertainment of the Union of Aztec Students. A conversation emerged where Paez showed Scholbrock his music and she showed her support before broaching the subject of the Nooner series. Paez then found out that Scholbrock was running the music events at SDSU.

Paez said he was of Ecuadorian descent and lived in New Jersey before coming to SDSU. He has two songs on his Spotify verified Account. He performed these two songs on the Nooner. One of the songs, “Prescription Medicine,” drew a lot of public comment.

“And are we enough to save each other? Enough to save us, “sings Paez in” Prescription Medicine. “” I know we’re broken, but sleep now, I’ll call you tomorrow morning. The phone ringing reminds me that we’re still breathing and your voice is like a prescription drug.

Paez said the song was based on a relationship he had with a girl named Bella, which is the name of his other song on Spotify.

“Prescription Medicine” and “Bella” both make lyrical references to the pills.

Paez said it was both a metaphor for their love, but also an allusion to the love-hate relationship he has with his depression and anxiety medications.

“I knew I had chemical imbalances in my brain that I had to take care of,” Paez said. It was a big war for me in my head, kind of like hating the drugs and also being thankful that it helps me in some way.

Paez said he likes to reflect his internal struggles in his songs.

The freelance artist started learning to play the guitar in eighth grade, but said he didn’t start taking it seriously until his second year of high school.

“When I discovered songwriting, I got hooked,” Paez said. “I wanted to write about everything I was going through.

For Paez, this trend continued. He was part of Aztec music group during his freshman year at SDSU and was inspired by artists like Jeremy Zucker. Music is a therapeutic process for Paez, and he said he feels his Spotify is outdated since it has changed in many ways recently. He was also inspired by his time in quarantine.

“They’re all very ruminative, like I’m having a conversation with myself in my head,” Paez said, “And that’s one thing I love about writing songs is that I can talk to myself or myself. “

Paez had friends in the front row, listening to his performance.

Andrew Valencia, a junior specializing in biology, was among them.

“I was walking near the Union and saw his billboard pop up,” Valencia said.

Valencia said he got chills and it was nice to see Paez show so much passion.

Bryce Mendoza is a third year major fundraiser, who was in charge of sound mixing for Paez during the event.

He said he thought the event had gone well.

“It was the first event I had been able to attend in a while, so it was exciting,” said Mendoza.

Paez said he felt relieved after his performance because he was really nervous beforehand.

Paez was happy with the support of the crowd. Of the 11 songs he performed, he rated “Bella” as the best received. He was also delighted to perform an unreleased song at the end of his performance.

“I have this bridge where I haven’t really done anything this intense before, so I enjoyed this one,” Paez said.

Paez ended his performance with a resounding message.

“Thank you very much f ****** to everyone who came by, and I’m glad people are willing to listen to my shit,” Paez said.

Pair Demystifies Mindfulness – One Podcast at a Time | New