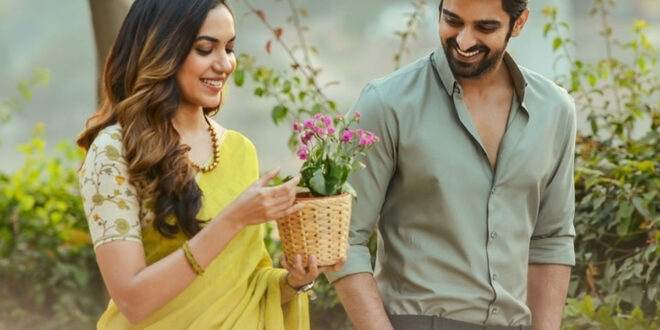 Having overcome all obstacles, including the first and second wave of the Covid pandemic, Varudu Kavalenu is finally on screens today. The film marks the launch of director Lakshmi Sowjanya and dialogue artist Ganesh Ravuri. As the duo try to give a regular story new appeal, check out if all of their efforts are paying off?

Bhumi (Ritu Varma) is an authoritarian woman who runs a start-up. Her mother (Nadhiya) wants her to get married and settle down. Aakash (Naga Shaurya) is a renowned architect in Dubai who waives a deal of Rs 200 Crore and comes to Hyderabad. How are Bhumi and Aakash connected? What is their flashback? Are they finally uniting?

Akash is a tailor-made role for Naga Shaurya who pulled off the character effortlessly. He is handsome and looks dapper on the screen. It does a neat job in the interval and climax portions, especially in the emotional scenes. Rarely do heroines get a substantial role. Bhumi is one of those roles for Ritu Varma. He’s one of the best characters she’s played in her career to date. Nadhiya, Murali Sharma get decent roles. Vennela Kishore went missing in the second half. Sapthagiri’s “lag” comedy fireworks create magic, however. Comedian Praveen is a good friend of the hero. Comedian Satya is confined to a flashing and failed cameo. Jayaprakash is good as the CEO of Bhumi’s start-up and its benefactor. All the actors have good characterizations.

‘Varudu Kavalenu’ is a very old tale but with interesting characterizations. The first half of the film is airy, decent. This sets the tone and the mood for the second half. However, there isn’t much left for the directors to fill the film with. The college flashback scenes are dated. They need a new writing. The work of beginning director Lakshmi Sowjanya is impressive. The dialogist Ganesh Ravuri flies with his dialogues. There are several eye-catching one-liners in the film that audiences take home. Cinematographer Vamsi Patchipulusu is the unsung hero because every image is bright and colorful. The music and background score by Vishal Chandrasekhar complete the visuals. SS Thaman’s folkloric number Digu Digu Naga wowed the masses. The production values ​​are rich.

‘Varudu Kavalenu’ is a mundane story that is best handled and shaped. It’s the simple story of a guy and a girl who go their separate ways and reunite. How it all goes done for the movie. But the cause of the couple’s split – not just once, but twice – is not convincing enough. The first part of the film is balanced with comedy, songs and fighting in good proportions. The actors’ conversations are interesting and move the story forward. By the way, it’s clear where the film is heading.

As the second half of the film kicks off, the director seems to be running out of steam. And that’s how she starts the movie with the flashback episode. The college scenes are really a bit boring. They try to justify what made Bhumi so hard, but has a single breakup made her so? Even it wasn’t a real breakup since Bhumi didn’t express his love. She gives up when she learns that Akash is focused on her career and doesn’t have time for love. These require special attention in writing and manufacturing. The second half is slow and flat except for the last 30 minutes, which comes out as a highlight of the movie. The emotional climax works in the film’s favor.

The comedy gives relief to the viewers and makes us forget all the aforementioned faults. Sapthagiri’s ‘lag’ fun has the audience divided. Music and photography are helpful. Overall, ‘Varudu Kavalenu’ has its moments. The soul of the film is intact. It is a decent watch for families and young people. After a long time, the audience had a family animator of their own.