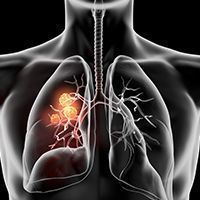 Patients with extensive stage small cell lung cancer (ES-SCLC) whose disease harbors inflamed T cells or YAP1 according to an exploratory analysis of the Phase 3 CASPIAN study (NCT03043872) which was recently presented at the AACR 2022 Annual Meeting.1

An analysis of 2 different RNA sequencing-based SCLC subtyping methods applied in the context of CASPIAN data demonstrated that patients with these subtypes experienced the longest OS after treatment with the combination of immunotherapy compared to patients expressing POU2F3, NEUROD1, and ASCL1.

These data are consistent with previous findings, although further research is warranted to determine the relationship between these biomarkers and immunotherapeutic response, the study authors noted.

“When the 2 RNA-based subtyping methods were applied to CASPIAN data, we found that the 2 methods were consistent in differentiating neuroendocrine from non-neuroendocrine subtypes, and showed the greatest concordance in non-neuroendocrine subtypes,” said study lead author Yashaswi Shrestha. , PhD, director of oncology translational medicine and clinical biomarkers at AstraZeneca, said during a presentation of the results. “Of the 4 subtypes, the inflamed subtype determined by Gay et al and the YAP1 subtype [determined] by Rudin et al showed the longest overall survival in durvalumab/[chemotherapy] arm, suggesting that [this] subset of patients who have an inflamed phenotype are primed to respond to immunotherapy.

CASPIAN Phase 3 researchers enrolled 805 patients with treatment-naïve SCLC-ES and a World Health Organization performance status of 0 or 1, life expectancy 12 weeks or more and measurable disease according to RECIST v1.1 criteria. Patients with asymptomatic or treated and stable brain metastases were allowed to enroll.2

These results established durvalumab/EP as the global standard of care in ES-SCLC.2 The combination is FDA-approved for the first-line treatment of patients with ES-SCLC.

Investigators in the exploratory analysis therefore assessed the concordance between the 2 methods and their association with improved OS using RNA sequencing data from the Phase 3 CASPIAN study.

Overall, the biomarker-evaluable (BEP) population consisted of 57 of 268 patients on durvalumab/EP and 47 of 269 patients on EP monotherapy arms.

Le Rudin et al. The SCLC 20193 subtyping method revealed that YAP1 was commonly expressed in all subtypes, although at a relatively low level. Therefore, a sample was labeled as YAP1 if the YAP1 expression was greater than ASCL1, NEUROD1, and PUO2F3. Of the 4 transcription factors determined to be a sample subtype, ASCL1 and NEUROD1 have been classified as neuroendocrine while POU2F3 and YAP1 devoid of neuroendocrine markers.

Le Gay et al. The 20214 SCLC subtyping method used a genetic signature of 1300 to organize the subtypes into 4 hierarchical groups, each of which was assigned a subtype based on the most expressed gene of ASCL1, ODNUM1and POU2F3. The fourth group, which showed low expression of all 3 genetic signatures, was designated as the inflamed subtype due to its inflamed genetic signature.

“This finding is consistent with previous observations,” Shrestha concluded. “[However]further analysis is needed so that we can gain confidence in response and resistance biomarkers for immunotherapy and small cell lung cancer.

Due to the limited sample size of eligible RNA sequencing data, these findings should be considered hypothesis-generating, Shrestha noted.